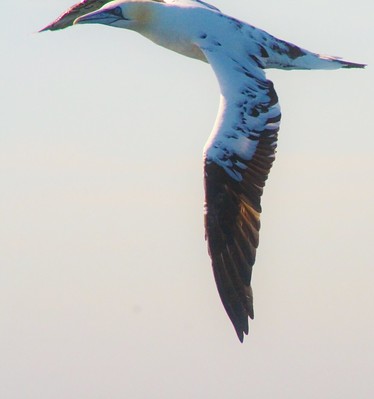 The Northern Gannet (Morus bassanus) is the largest seabird in the northern hemisphere, with 1.8m of wingspan and is a constant presence in our expeditions.
Individuals of this species are easily identified by the “fluorescent white” and indistinctive forehead. Their flight is very effortless, spending most of the time gliding.
In the area of our expeditions, we mainly find juveniles, as the adults stay in higher latitudes. Like the seagulls, it is possible to determine their age (up to 4 years) by the portion of black feathers over the white.
They hunt fish that swim not too far from the surface and it is usual to see them diving like a missile to catch fish. With this behaviour, they can get to a depth of 10m and could swim down to 20m deep.
These seabirds can be sighted all year-round, as all non-reproductive individuals stay in Portugal during the summer. Adults can be also sighted off the breeding months (Summer). 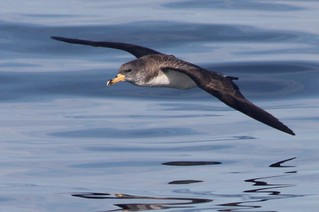 The Cory’s Shearwater (Calonectris borealis) is the third largest seabird in the area, with a wingspan above 1m.
They can be identified by the dark backs and white bellies. Like the Northern Gannet, they fly effortless and ‘sail’ the winds between the waves, almost touching the surface with the wings. They can be confused with several other shearwater species, but the others are significantly smaller.
This species is mainly a visitor in the warm months, because there are few breeding grounds in Europe (Portugal inclusive) and they spend the winter in the Southern Atlantic. 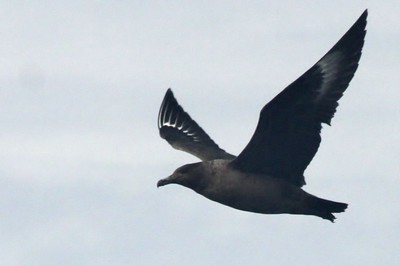 The Great Skua (Stercorarius skua) is the second largest seabird in the area and it is an opportunistic hunter, preferring to steal catch from the previous seabird species.
Unlike the previous species, they don’t glide and need to constantly flap their wings. This makes them not adapted for gliding but with this behaviour they can have additional agility, enabling outmanoeuvring of the other birds during the chases. Their main characteristic is the full dark colouring with “flashing” white trap in each wing.
They are frequent during Autumn and Winter, as Portugal is the wintering grounds of this species. 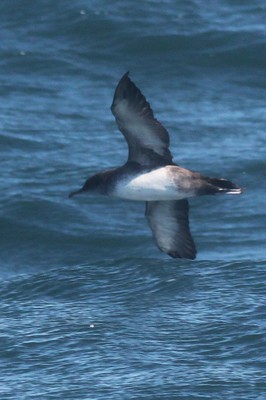 Other Shearwaters can be sighted, but they are significantly smaller that the Cori’s Shearwater. Unlike the Cori’s Shearwater, they tend to shortly flap the wings frenetically between glides.
The Balearic Shearwater (Puffinus mauretanicus) is the most common, being dark brown on the back and white on the belly. Just like a miniature version of the Cori’s Shearwater. This species can be seen all year-round, specially after Summer, before (only) the adults move to the breeding grounds in the Balearic Islands.
The Sooty Shearwater (Ardenna grisea) looks like a all dark version of the Balearic Shearwater, easily distinguishable through the black belly. This species is usually sighted between August and October, during their migration to Southern tip of South America! 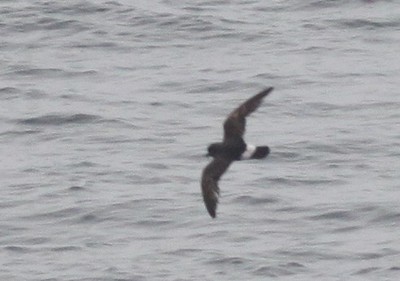 The Storm petrel (Hydrobates pelagicus) is a rare sight, normally in the days after a storm. They look like a swift, but bigger. The white spot before the tail is its key feature.
This species can be seen mainly in Spring and Autumn on during the migration between the UK islands and South Africa. 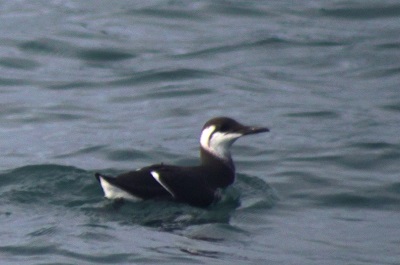 The Common murre (Uria aalge) is only seen in winter months, as they spend the rest of the year in Scandinavian and Russian waters. They are the closest we can get to a penguin in the northern hemisphere. They are agile swimers, diving to 60 or even 180 meters deep! But also are able to fly. 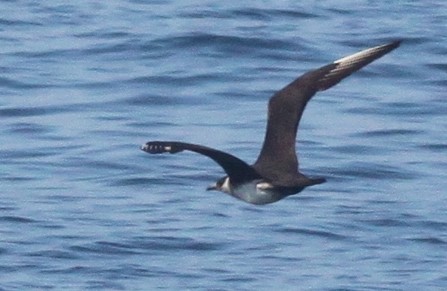 The Arctic Jaeger (Stercorarius parasiticus) is a rare species, as our expeditions are usually too close to the coast to be able to sight them.

Individuals of this species can be sighted in Spring and Autumn during their migration.

The Cormorant is normally seen close to the coast on the way out or return from the dolphins expeditions. Unlike the other seabirds, this species needs the land to dry its feathers. This is because individuals are not water proof! In order to be able to dive effortless they need the feather to soak with water.
There are 2 similar species in our coast: the European shag (Phalacrocorax aristotelis) individuals of this species can be found year-round as there are resident. And the Great Cormorant (Phalacrocorax carbo) is all over the area during Autumn and Winter months. They are distinguishable from the shags, by the thicker beak, yellow and white cheeks and lack of a crest.. They are