Geologic and genetic findings put the colonization of the Sado Estuary by the bottlenose population thousands of years ago. Most likely, shortly after the formation of the estuary itself, during mid-Holocene around 8000-6000 years ago. The earliest human settlements, only came during the Neolithic, ~2000 years later. Due to this, dolphins are embedded in the local culture as they arrived before any human. This close relationship can be seen in Roman art. In 1863, the zoologist José Vicente Barbosa du Bocage observed that the dolphins found in the Sado Estuary were not occasional, which indicated the possibility of residency. However, the proof of the dolphins residency only came 118 years later.

The first focused studies were undertaken in 1981 (Teixeira & Duguy, 1981). These studies showed that individuals of the population were being seen over and over again. The first assessment of the whole population was in 1985 (dos Santos, 1985; dos Santos & Lacerda, 1987), with a development of a catalogue with 42 individuals. These studies mark the furthest back in time we can go regarding individual history, meaning that the age of dolphins older than 43 years old, are an estimation.

Since then, the size of the population has been dropping and in 2005 and 2009 the population reached its smallest size of 24 individuals. This decreased is mainly due to high infant mortality (<1 yr old), emigration of juveniles (10s yrs) and large percentage of elderly individuals, reaching or already over a dolphin’s life expectancy (~45 yrs).

The names of the elder individuals were given by the first researchers. The most recent ones are a combination names given by children of local schools and public voted names. Each individual gets a name on their 1st anniversary and because the gender is never known in so early stages, sometimes leads to females with male names (Moses is a female) and vice versa (Irma is a male).

The following data is based on the sightings of our expeditions and from APCM’s previous works. We have been following the individual’s official names based on the researcher Raquel Gaspar, which can be found in the ICNF webpage. We also used the master thesis of Ana Coelho, in order to have references of the new juveniles (Estrela and Bolinha).

The official count for 2022 was 25 individuals. We’ve confirmed the presence of 24 individuals so far in 2022.

Until this year, this was the largest matriline. It extends through 4 generations. 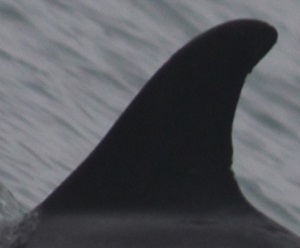 Her body size was big enough to be considered an adult in 1981, making her over 52 years old. Not seen often, she is the least sighted individual, only recorded in 1/4 of our expeditions. Despite her age, she seems to like the company of “teenagers”, especially her son Victoria, which was present in all of her sightings. Her elder daughter Esperança (Hope) hasn’t be spotted in the last years. 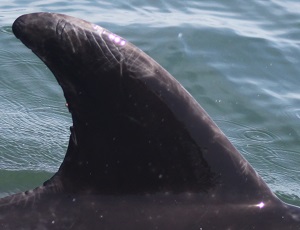 Male with 13 years, with an almost full grown body. He is the 2nd most sighted individual and one of the greatest jumpers. He is usually seen with the other teen-boys, namely Cocas and Tongas. Victoria is Mrs Hook’s last and only offspring left. 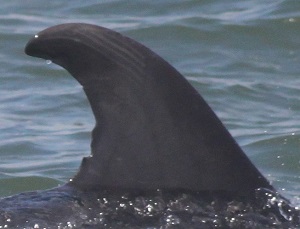 Female with 18 years, she is Mrs Hook’s granddaughter and daughter of Esperança. She is the 3rd most commonly seen individual and she can be easily identified  by the curled dorsal fin. She is one of the most jumpy females. Usually hangs out with Cavalito, Ligeiro and her uncle Victoria (which is younger than her).

UPDATE: Bisnau has now an offspring with 3 years, Bolha (Bubble). 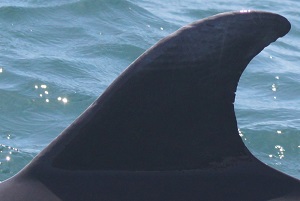 Male with 12 years, he is Mrs Hook’s grandson and last son of Esperança. He is maturing fast to a grown dolphin now. Is one of the darkest dolphins if the population. He belongs to the club of the jumpers. He usually hangs out with Cavalito, Ligeiro and Todi. 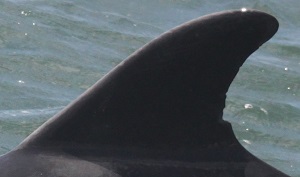 Her body size was big enough to be considered an adult in 1981, making her over 52 years old. She is the 5th most sighted individual and we call her the “sheriff” as where is any buzz, she is always patrolling nearby. She has been always accompanied by Cavalito, during our expeditions. 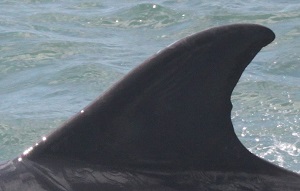 Female with 16 years, she has a small body size for her age, looking like a juvenile. She was a newborn when we started studying these dolphins! She is associated with Cavalito and lately has been seen interacting with the teenager males, namely Tongas and Victoria.

UPDATE: Bisnau has now an offspring with 3 years, Neptune. 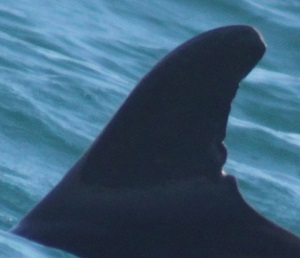 Her body size was big enough to be considered an adult in 1986, making her over 48 years old. Easily identifiable at distance, by the missing tip in the dorsal fin. Strangely, only had 2 offspring that we know of. She is usually accompanied by Bisnau. 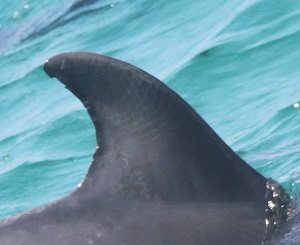 Female with 12 years, the last offspring of Topo Cortado. She is the most recent mother and the youngest. Usually seen with Cavalito, Ligeiro and Bisnau.

UPDATE: Bisnau has now an offspring with 4 years, Future.

Like Mrs Hook’s, this matriline has 4 offspring, but instead of elder daughters, Serrote has elder sons. Irma has very probably his own offspring, but there is no visual way to know which of the juveniles he fathered. 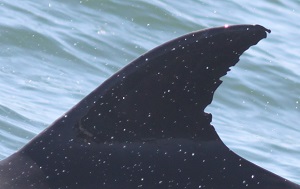 Her body size was big enough to be considered an adult in 1984, making her over 50 years old. Easily identifiable by the sharp dorsal’s tip. She is usually accompanied by Cavalito and her latest offspring Lua. 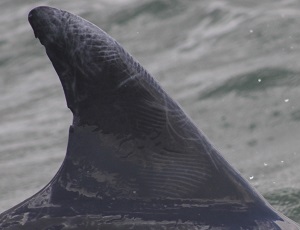 Male with 23 years old, the oldest known offspring of Serrote. Easily identifiable at mid-distance, by the deep bite in the middle of the dorsal fin. He is always found in the interactions with the coastal groups. He usually is accompaned by Raís, his mother Serrote and younger sister, Todi. 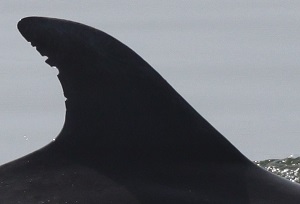 Male with 17 years, the 4th most seen individual and always ready for jumping and human watching. Normally seen with Victoria, Cavalito and Tongas. 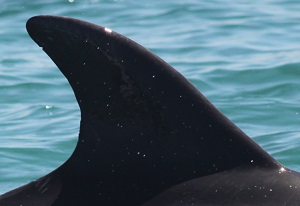 Female with 11 years, she might be the most jumpy of the female, often jumps very close enough to the boats, giving some “heart attacks” to our guests. She is associated mostly with the young males, Tongas and Victoria.

UPDATE: Bisnau has now an offspring with 3 years, Coral. 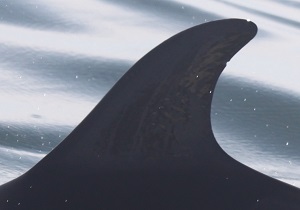 Is 6 years old. Still unknown, but behaves like a girl! Still not scientific, to be official. Spends the majority of the time with the mother, spending few time with other juveniles.

Negro is a +46 year old female seen from 1981 until 2017. She was over 47 years old when disappeared. She possibly died or left the population. The last one is our favourite hypothesis as a coastal individual started being spotted in 2018 that is extremely similar to Negro. We will need further expeditions to get sharper photographs. 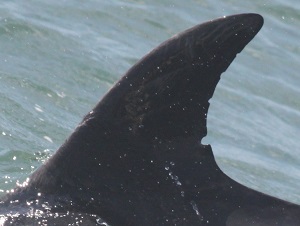 Male with 27 years, the oldest male with known birthdate. He had a double, Esperança, which had a very similar dorsal fin. He was a great jumper, but not so often anymore, because of his age. He is a good candidate for close encounters. Usually associated with Victoria and his little brother, Tongas. 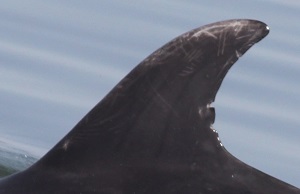 Male with 17 years, he is the 3rd most sighted individual and one of the jumpers and regular human watcher. Usually associated with Cocas (17), Victoria and Moisés (15).

Azul’s matriline is currently the smallest, with only one offspring left, Bolinha. She had a total of 4 known calves, most disappeared at young age. Batalha (Battle), born in 2010, was the only one that managed to grow old enough for being able to emigrate. 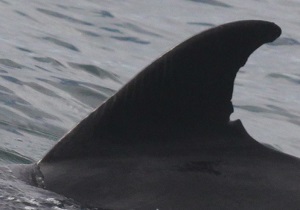 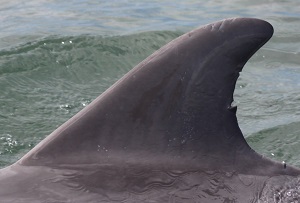 Likely a male with 6 years and offspring of Azul. Usually a quiet juvenile, only seen in energetic interactions with male juveniles this October. Commonly associated with Azul, Bisnau and Ligeiro.

The definitive way for sexing a dolphin is through a sharp and clear photograph of the belly, usually during a jump. But in most of the cases gender is inferred through the behaviour, mainly the females by the consistent presence of a calf for extended periods.

The opposit isn’t that sure. The classification of “presumably male” means that it is unlikely to be a female for lack of calves in a very extensive period of time. Most of the individuals in this situation were never recorded in the presence of calves, for over 20 years of observations. But they could be females with zero birth success, so we still need a belly photograph for final confirmation 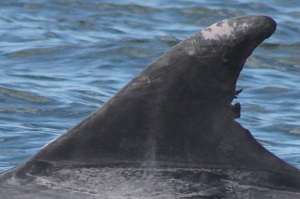 His body size was big enough to be considered an adult in 1981, making him over 53 years old. He is the lightest individual. He is usually accompanied by Cavalito and her latest offspring Lua. 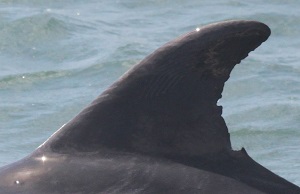 His body size was big enough to be considered an adult in 1983, making him over 51 years old. He is the most sighted individual and the most active elder, he still jumps! It seems that he was spotted in Lisbon in late 80s, no photograph for objective confirmation.  He is usually accompanied by Cavalito and Ligeiro. 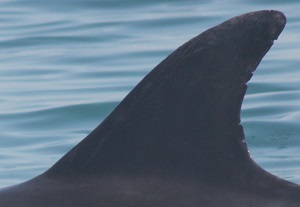 Presumably male with 25 years. He is the only member of Purpúrea’s (Purple’s) matriline. He is very calm, rarely seen in play mood. He is usually accompanied by Cavalito, Ligeiro and Victoria. 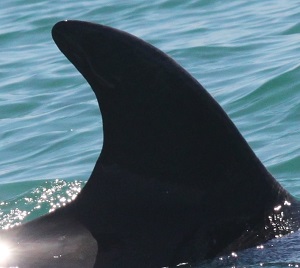 Male with at least 13 years. He is a coastal bottlenose that was “adopted” by the population in 2012. He would be a 2 year old at that time that probably got lost from the parental group. Is not very uncommon to find juveniles alone in the nearby coast. He is energetic and engage in play with the other juveniles. He is only seen in 32% of our expeditions. He is usually accompanied by Irma, Bisnau and Todi.