The blue shark (Prionace glauca) is by far the most common species, sighted mainly in late summer when we have high affluence of juveniles. The adults are seen once in a while and can reach 3m long.

The smooth hammerhead shark (Sphyrna zygaena) is seen rarely in Espichel Cape, one of our expedition areas, as they avoid boats.
The basking shark (Cetorhinus maximus) is the second largest fish in the world. The records for the largest animals of this species are above 12m in late XIX century, but after decades of hunting, nowadays individuals reach on average 6 to 8 meters long. They are gentle giants, like the whale shark (Rhincodon typus) and they feed on the small plankton. Basking sharks are normally very tolerant with boats, enabling guests to snap some photos.

The mako shark (Isurus oxyrinchus) normally wanders in offshore waters and is rarely spotted on the areas covered by our expeditions. Mako sharks are the fastest shark species in the world. Very often, they are misidentified as the great white shark (Carcharodon carcharias) due similar body shape and colouration.

The common thresher (Alopias vulpinus) spends most between the surface and 40m deep, feeding on the same fish as common dolphins. Most of the individuals seen in the area are juveniles. Adults reach on average 6m long, but almost half of their length consists of elongated caudal fin. Which is used for striking and incapacitate their prey.

The common eagle ray (Myliobatis aquila), close related to sharks (Batoidea), can also be observed close to the river, where the river waters meet the waters from the sea. Is the only ray that usually adventures to the surface.
.
.

Bony fishes (Actinopterygii) can be spotted running away from the bow of the boat, many times in large schools and once in a while the flight of a flying fish (Cheilopogon sp.). Most often are spotted jumping out the water while being hunted by the dolphins. Here we’ll focus in the largest members, that justify stopping the boat for seeing them:

The Sunfish (Mola mola) is the largest bony fish in the world, adults reach on avegarage 2,5m in height and 1000kg. They are the most common large bony fish to spot in the area, normally a juvenile jumping out of the water. While larger individuals are found basking at the surface, warming at the sun after a deep dive.

The bluefin tuna (Thunnus thynnus) deceives our efforts of finding the dolphins, as they hunt fish in a similar way, like common dolphins. This makes identical surface splashes and even jumps. It is know for them to hunt together with the dolphins and are the favourite meal of the Iberian orcas. These fishes are highly migratory species, designed with strong endurance muscules, that enable rising their body temperature above the environment’s. This is key feacture for a cold-blooded animal, which helps them to get closer to other apex predators like dolphins.

The sword fish (Xiphias gladius) with top speeds of 90 km/h, is undoubtedly in the top 2 of the fastest marine animal in the world. They can be seen in calm seas, basking at the surface in early morning. Like the sharks, they present the tips of dorsal and caudal fin above the surface. Like the bluefin they also benefit from body temperatures above their environment.
.
. 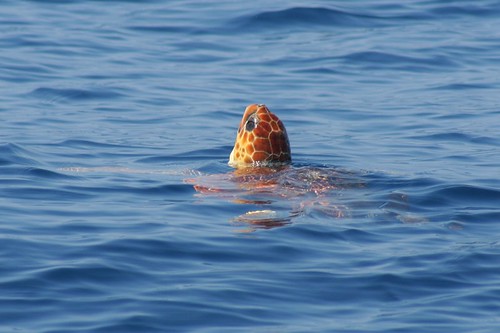 The loggerhead turtle (Caretta caretta) are the second largest sea turtle in the world, growing on average to 1m in length and 200kg. Commonly seen resting at the surface, warming up at the Sun, in the area when warm offshore waters get closer to the coast. Their shell is covered with pointy plates.

The leatherback turtle (Dermochelys coriacea) is the largest sea turtle in the world, reaching 2m in length and weight up to 700kg. They have the most hydrodynamic design of all sea turtles and have the largest flippers in proportion to its body. Their main feature is the lack of plates in the shell, which is covered by leather like skin. Along with other physiological characteristics, these turtles are adapted for exploring cold waters. 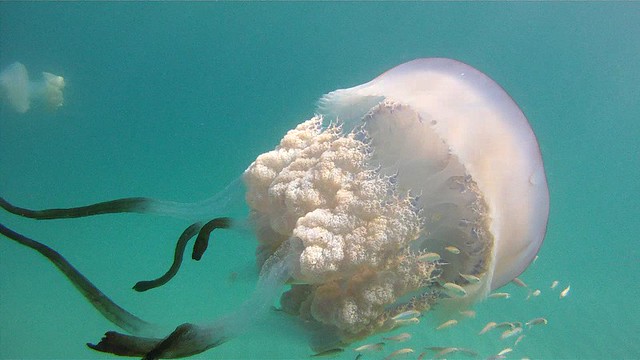 The Catostylus tagi is the most common jellyfish, as they flourish in the Tagus Estuary and are taken with the flow to the neighbouring sea. They can be easily identified by the X shape stomach in the bell. In early autumn they can reach 1m long.
The barrel jellyfish (Rhizostoma luteum) is the largest jellyfish in Portugal growing to the size of a person. They are a favourite food of the leatherback turtle.
.
. 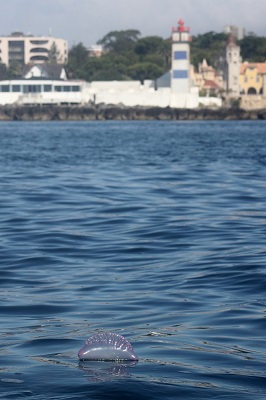 The portuguese man’o war (Physalia physalis) is not a single animal but a colony. Like ants that have different ant shapes doing different tasks in the same species, so do the portuguese man’o war. The peculiarity is that they actually float in the ocean and are influenced by the wind. Normally in offshore water but on the right conditions get closer to the coast. Their powerful sting is enough reason for closing beaches if one is found.