The popular idea of orcas being cold waters animals is wrong. The orca is the 2nd most wordly distributed mammal on Earth, loosing only to humans. They can be found in ALL oceans and regularly sighted in ALL continents, from warm tropical seas to ice covered seas in the poles. Orcas can even be sighted in the Red Sea, Persian Gulf, Mediterranean and Hudson Bay. Only being absent from the Black and Baltic Sea.

This makes  existence of orcas in Portugal nothing out of the extraordinary. Specially with the recent growth of dolphin watching companies, which enabled regular sightings of this species. These orcas seen in Lisbon belong to the Iberian orca population, a fish eating ecotype. They are the same individuals regularly seeing in the Strait of Gibraltar, Spain. The small number of individuals in this population (30s) imposed special protection, and since 2014 they had been designated by the IUCN as “critically endangered”.

However historical data in Portugal is scarce, but the oldest record we’ve found is from 1927, when a group of 5 orcas was sighted southwest of Lisbon (Pereira, 2012). In Spain, Iberian orcas records are far older, dating back almost 3 millennia. Back then, Phoenician fishermen from Gadir (today’s Cádiz, Spain) had already agnolished the presence of orcas as both where after the Bluefin tuna. Pliny the Elder, a famous Roman naturalist, described how orcas preyed on baby whales near the Bay of Cádiz (Hickok, 2018). These whale species are slow swimmers, the North Atlantic right whale (Eubalaena glacialis) and the Atlantic grey whale (Eschrichtius robustus). This characteristic alowed the orcas to prey on them and humans to hunt from small boats. These whales ended up hunted down to extinction, by European whalers during the Middle Ages. The remain species are rorquals, fast swimming whales, that for this reason, are not suitable to hunt. This situation lead to the complete removal of whales from the feeding “menu” or to the extinction of those whale families/groups.

These orcas seen in Lisbon belong to a genetically distinct population from the orcas that occur in higher latitudes of the Northeastern Atlantic (North Sea, Iceland and Norway), belonging to the same genetic population as the orcas in the Canary Islands (Foote et al., 2011). However it seems that these groups (Iberian) do not interact with the individuals from the Canary Islands, as they do not share the same parasite load (Mackenzie, 1999; Dwyer & Visser, 2011) nor similar food sources (Esteban, 2013).

Off South Portugal, in the Strait of Gibraltar (where these orcas seen in Lisbon spend the summer time), have been studied for decades and identified at an individual level. During spring and summer months, they are regularly seen in the Strait, which is associated with the migration eastern stock of Atlantic bluefin tuna, into the Mediterranean for spawning (Guinet et al. 2007; de Stephanis et al. 2008).

For our catalogue of the orcas sighted in Portugal, we followed the ID codes and names of the catalogues from the research teams in the Strait of Gibraltar (CIRCÉ). 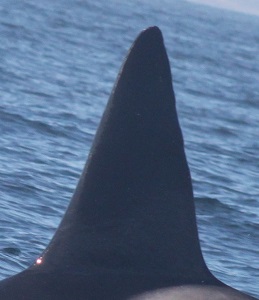 005 Morales was the only adult male of the pod when sighted in 2017, he is believed to be around 30 years old. Easily identifiable by his massive size and very isosceles shape of his dorsal fin. 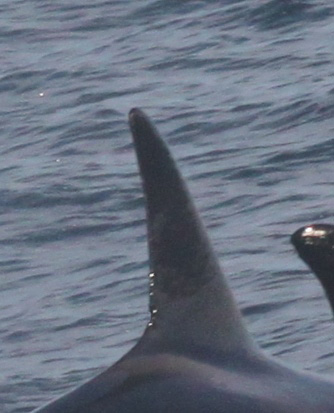 001 is old female, easily identified by the nick at the bottom of the dorsal fin.

Muesca’s matriline is composed by her 3 offspring and her grandchild. They belong to the group of orcas that steal tuna from the fishermen in the Strait. This matriline was the first spotted in Lisbon, along with Morales (005), 031 and 001. 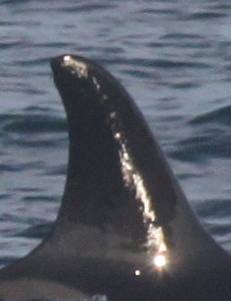 009 Muesca (Notch) is the matriarch, she born in late 80s and formed her matriline in 1997. She had 4 known offspring. Can be easily identified by the notch on the tip of the dorsal fin. 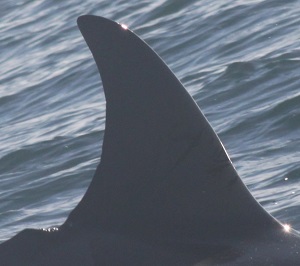 018 Corsica is 17 years old, born to Muesca (009), she was her second known daughter. Can be easily identified by the large injury after the dorsal fin, resulted by an unfortunate encounter with fishing gear, which also took her pectoral fin. 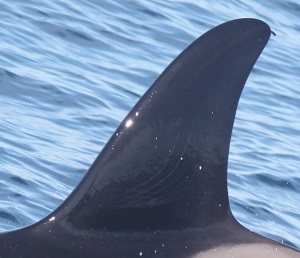 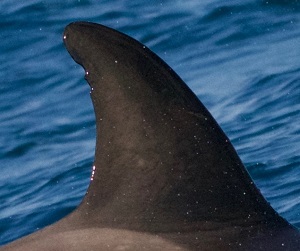 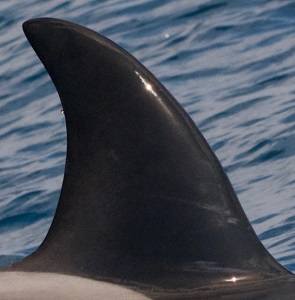 033 she is 14 years old and is Lamari’s (003) daughter. The only member of the matriline spotted near Lisbon.

Toni 011, is a 50 years old female and had at least 3 offspring. She is very easy to recognise due to her very short dorsal fin. She was spotted along other orcas north of Lisbon on January 12th 2020.

Unlike the other groups, this do not stay in the Strait, spending the summer in South of Portugal an Cadiz coast, hunting the bluefin tuna trapping by them in shallow waters, near the beach. Due to this they are poorly studied. This group usually leaves the Strait earlier than the other groups, passing by Portugal in August on the way up to north. They were the only ones (that we know of) to be spotted in the Basque Country, in France! It is composed by 2 matrilines and other 3 individuals:

This matriline is composed by 054 the matriarch and her offspring 055. Not often seen in the Strait, they’re mainly seeing the the south of Portugal during the summer.          +Read More

This matriline is composed by 051, the matriarch and her offspring: 050 is a mature male <20 years old, he is thought to be 051’s offspring. 052 and OOLX01 are still young juveniles. Normally associated with 054’s matriline (2 individuals) and other 4 orcas in the Gulf of Cadiz.