In our expeditions you can find four large groups of animals:
Cetaceans, which are represented by dolphins, whales and porpoises. Most of the sightings are of dolphins but whales and porpoises are also possible to see. Cetaceans are the only marine mammals that are frequently observed in Portugal, as seals only can be sighted in the Madeira Islands. There are at least 17 cetacean species occurring in mainland Portuguese waters.
Birds, can be estuarine birds such as Eurasian spoonbills, godwit, herons, flamingos, osprey or seabirds that spend the whole year at sea, such as cormorants, northern gannets, shearwaters, skuas, Jaegers, and storm petrels.
Sea turtles, are the only representative of the marine reptiles and the most common specie is the Loggerhead sea turtle (Caretta caretta).
Fish, which are mainly the large pelagic species like the sunfish, sharks, the eventual tuna and the swordfish. A huge variety of smaller fish can be also observed.
Invertebrates, mainly the jellyfish which is sighted during the tours, specially the Catostylus tagi that can reach 1m long during early Autumn. A large variety of invertebrates can be observed during snorkelling, such as octopuses, cuttlefish, anemones, nudibranchs, sea-urchins, sea cucumbers and starfishes.

The short-beaked Common Dolphin (Delphinus delphis) is the most likely species to observe during the expeditions as they are easily spotted by their regular leaps. They are the favourite species of the guests because they are curious and spend plenty of time close to the boat.
They are identified by the complex colour patterns, with an hourglass shape and the distinctive yellowish colour in the front.
This species feeds on the water column and it is normally found in groups of 10-30 individuals. However, every year we see a handful of groups that can reach hundreds of individuals. These are the main species to enter the Tagus river.
This species is very abundant and therefore it is not a target of our focused research. However they require managing of the sardine stocks as it’s their main food source. We undertake photo-ID on the conspicuous individuals and develop basic ecology studies about this species.
In 2020 we have masters project from Evora’s university on this species.

The Bottlenose Dolphin (Trusipos truncatus) is the “popular dolphin”, usually observed nearer the coast, and it is a more discrete species than the common dolphin. However, some individuals of this species can be the most acrobatic species (when they are in a good mood).
Individuals are more than twice the size of the common dolphins and weight 4 times more. Reaching 600kg they are massive dolphins!
This species feeds on both the water column and the ocean bottom. Dolphins form groups of 10-20 individuals but they can also reach numbers of 50 individuals.
In Portugal this species occur in 3 ‘formats’ (ecotypes): Offshore; Coastal and Resident. Our coastal population is nomad and roams along the coast while the resident is settled in a river’s estuary. Portugal has one of the smallest and most endangered resident bottlenose dolphin populations in Europe. This species also enter the Tagus river but only for few hours.
This species is listed on the European Union’s protected species list and therefore its scientific study and monitoring are crucial tasks for its conservation. These species have their own special areas for conservation all over Europe including in Portugal. They are our main study subject and we catalogue every individual that we meet, through photo-ID as well as behavioural ecology.

The Striped Dolphin (Stenella coeruleoalba) is more frequent in deeper waters and farther from coast.
This species can be distinguished by the characteristic “brushstroke” of lighter colour to the dorsal fin and the fine lines coming from the eye to the tail.
This species feeds on the water column and individuals are very similar to the common dolphins in size and habits. This usually results in striped dolphins being seen associated with common dolphins, and collaborating on a hunt or just socializing.
This species stays in deep waters, far from human impacts and therefore it is not a target of our focused research. However they require managing of the fish stocks as it’s their main food source. We undertake photo-ID on the conspicuous individuals and develop basic ecology studies about this species.

The Minke Whale (Balaenoptera acutorostrata) is the most common whale in Portuguese coastal waters, and it is the smallest  baleen whale in the Northern Hemisphere.
Given its small size, the blow is hard to spot, making it a very discrete whale. It is distinguished from other whales by the small size and white spot on the fins.
In our expedition region, they appear to settle for a few months in a row, feeding of fish schools. Usually they are solitary animals, rarely swimming in pairs. 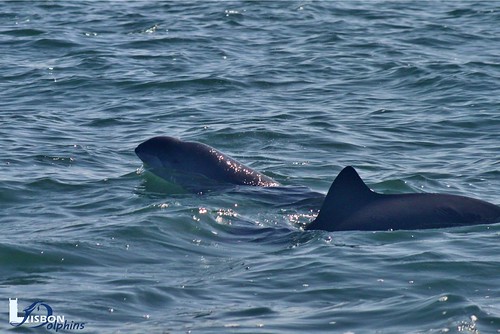 The Harbour Porpoise (Pocoena phocoena) may look like a dolphin but it is a member of a different cetacean family, the porpoises. Its distribution is restricted to shallow waters but it is extremely discrete, and usually avoids vessels. It is one of the smallest known cetacean in the world.
It is distinguished by the small size, very “dipping” dive and almost triangular dorsal fin. Usually individuals are solitary or swim in pairs.
The harbour porpoise is also listed on the European Union’s endangered species list, and therefore its scientific research and monitoring are crucial tasks for its conservation.  These species have their own special areas for conservation all over Europe including in Portugal. This species is of great interest because a supposedly resident population disappeared from the neighbouring bay in ~2003. Assessing if the individuals sighted in Lisbon bay are from a resident population is a crucial priority. 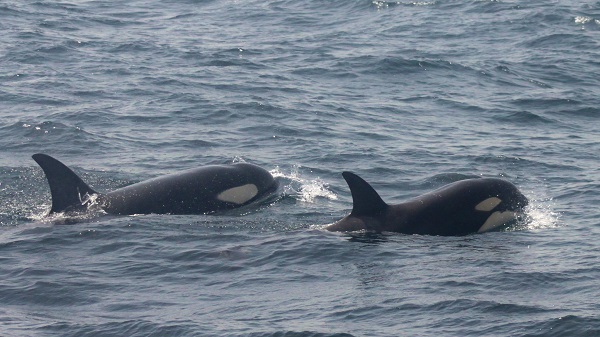 The Orca (Orcinus orca), is the largest dolphin in the world. Individuals occur in the area as transients on their annual migration up to north. There are 3 known families that pass by Lisbon Bay and other 2 that might do the same route, but never sighted by us.
It is almost impossible to confuse them, as they have a very peculiar colour pattern, a massive size and males have a 1.8m tall dorsal fin, that cuts the surface like a sword.
The orcas that can pass in Lisbon belong to the Iberian orca population with slightly more than 40 individuals and are bluefin tuna specialists. As most orcas in Europe, they only feed on fishes. We see them hunting alongside with the common dolphins.
They can be spotted between May and June, in August and in September-October. The fall period is the most when we sighted them more often as there are better sea conditions. They were recorded inside the Tagus and the Sado river. We keep a catalogue of all individuals that we meet.
+Read more about our orcas. 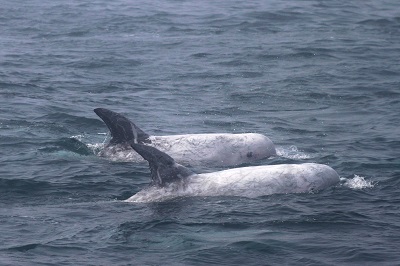 The Risso’s Dolphin (Grampus griseus), like the orca, belong to the beakless dolphin family (Globicephalinae&Orcininae). Despite their whale appearance they are also true dolphins.
They are easily distinguishable by their tall dorsal fins and almost white colour, which separates them from the other members of the family like the Pilot Whales (Globicephala melas), seen once in a while in the area.
Little is know of this species. They are normally deep water hunters and dive to great depths. It seems that they travel along the coast but further away from the coast. We also keep a catalogue of all individuals that we meet.

The Fin Whale (Balaenoptera physalus), is the second largest animal on Earth. It is the second most frequent whale to be sighted in these waters. However, it is extremely rare to be spotted alive close to the coast. Most sightings in our expedition area comes from strandings.
When not fully grown, they can be confused with the Sei Whale (Balaenoptera borealis), which also occurs in the area in the fall. The main feature of the fin whale is the asymmetric colouring of the head, which needs photographs of both sides to be sure. This whale is quite frequent (for a whale) in the Tagus river, normally die shortly after entering or they came already dead stuck on the ships bulbs.