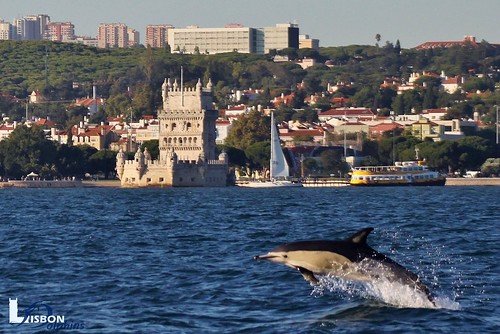 Lisbon is the main departure port, with meeting point in Alcântara. However due to weather conditions, boat issues, overbooking or lack of enough guests, there might be compromises to the departure of the boat from this port. Nevertheless, transport options for the alternative areas are included, normally from the usual meeting point, at Santo Amaro Dock (Lisbon Dolphins on Googlemaps). 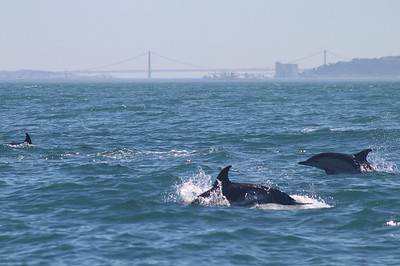 This is the bay where the Tagus river flows to. This is the area where the expeditions take place in case the minimum conditions are met. This bay is one of the few places in Portugal where you can still have a pure dolphin watching experience. You will be on a boat alone with the dolphins in the middle of the Ocean, as here there is virtually no other boats looking for them.
If we do not need the spare time for the dolphins, you will end the expedition with some cultural insights about the classic monuments that were designed to be seen from the river.


You might had or still planning to visit the wonders of Sintra. This mountain is a constant presence in the expeditions from Lisbon, as it stands higher than any other mountain in a 55km radius. It is also the only visible part of the Sintra-Cascais Natural Park (1981), with the woodlands contrasting with the urban skyline of the Cascais and Estoril Coast.
This area is famous by the friendly groups of common dolphins and the shy harbour porpoise.

In the western limits of the bay you might see the westernmost point of Europe, Cape da Roca. It’s our natural protector against the swell, coming from storms in the northern Atlantic.
Nearby you can see the magnificent cliffs of Cape Raso and Guia, with rocks formed in warm tropical seas from the time of the dinosaurs.

In contrast with the northern coast, most of the extent of the southern coast is protected landscape. This will take you back in time to when the Portuguese coast was in its pristine natural state. Here you’ll see the fossil cliff, with its delicate structures looking like fairy chimneys, resulting from the weathering processes on the soft sandstone.
This coast has been a protected area since 1984, following the implementation of the botanic preserve of the national forest of Medos in 1971. These woods were planted in the XVIII century to secure the moving sand dunes. We cross the woods when departure is from Lisbon’s neighbouring port.
Another constant landscape feature is the extensive wild beach (3rd longest in Portugal), that stretches for ~23km from the mouth of Tagus River almost to Cape Espichel.
This area is famous for more ‘exotic species’, the most common is the striped dolphins, the most beautiful dolphins in Portugal and the bottlenose dolphins.
As we travel south, the Arrábida mountains will start to replace Sintra, as the main feature of the landscape. The Arrabida’s National Park, created in 1976, protects the unique fauna and flora that inhabits these mountains.
To the south, Cape Espichel marks the end of the bay and it is rarely reached during expeditions departing from Lisbon. The cape separates Lisbon Bay from Setubal Bay and there are dinosaur footprints on the strata composing the cape.